After spending one week back in Europe following the Argentine GP, Marc Marquez and Dani Pedrosa are heading to the Circuit of the Americas in Texas (USA), for round 3 of the MotoGP World Championship.
Repsol Honda Team have achieved two 1-2 finishes in Austin with Marc and Dani : in the opening race in 2013 and also in 2014. For his part, Marc has never lost at the Circuit of the Americas (which was also the scene of his first-ever Premier-class victory, in 2013), nor has he started from anywhere but Pole Position in the four times he has raced at the track.
At the Red Bull Grand Prix of the Americas
– Marc Marquez has 4 wins and 4 Pole Positions (MotoGP : 2013 – 2014 – 2015 – 2016)
– Dani Pedrosa has 2 podiums (MotoGP : 2nd in 2013 and 2014).
Marc Marquez :
"After the Argentina race, I’m happy to go to a track I love as much as Austin, although of course I would have preferred to arrive there in a better position. Anyway, another race weekend is about to start and we’ll give 100% to try to get our first podium this season. I have great memories of Austin, and for me it’s one of the best venues on the race calendar. I like the layout of the track, as it has many different types of sections and corners and lots of elevation changes. I also love the “American” style, with all the fans enjoying the sport and the fun at the track, so let’s get back in action and see how it goes there."
Dani Pedrosa :
"We had the chance to spend a few days back home in Europe, to rest a little and also to do some good training, and now I can’t wait to get back on my bike in Austin. It’s a pity we didn’t get points in Argentina, but we’ll put that behind us and concentrate on the positives. Now that we know more about our bike, we’ll work to improve the stability and the general setup, and hopefully we can take another step this weekend. I like the circuit and visiting Austin and the fans are really fantastic there, so let's hope for a good weekend in Texas!" 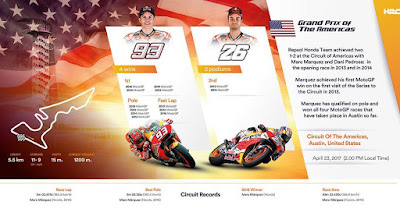