Argentina GP Gets Underway For The Repsol Honda Team

The Argentina GP race weekend began today for the Repsol Honda Team riders, with Marc Marquez second-fastest at 1’39.778” after a very close FP2 session that ended with the top 15 riders separated by less than one second.
Following a busy FP1 on a dirty track and a crash without consequences in turn 2 early in the session, Marc made significant progress in the afternoon, knocking more than a second off his morning’s best and setting a promising pace with the Michelin hard front and rear tyres.
Dani Pedrosa also avoided injury in a small crash (in turn 13 during FP2) and then improved his lap times, but despite closing just 0.567” down on his teammate, his best time of 1’40.345” meant he had to settle for 13th place.
Marc Marquez - 2nd - 1'39.778 :
“I’m quite happy with today because although we still have some issues to sort out, we’re not far from the top. As always happens here in Argentina, today the track was quite slippery in the beginning, and I crashed this morning because I was pushing a little too hard and went a bit off line. Anyway, after that we worked really hard and found a promising setup. We’re still missing something, and tomorrow we’ll try to improve in the second sector, especially the acceleration at turns 3 and 4.”
Dani Pedrosa - 13th - 1'40.345 :
“Today wasn't the best day for us because we suffered a rear-tyre puncture in FP1 and couldn't fully exploit the session until the end. In FP2 we started well, testing some tyres when the track conditions were good enough like we had planned, but unfortunately, when I was improving during my second exit, I lost the front and had a small crash. I was trying the hard front for the first time, it was only my second lap of that run, and I may have pushed too hard. That wasn’t ideal for the time attack at the end of the session, because the feeling was different after the crash. Well, sometimes you have days like this, and hopefully the weather will stay good tomorrow and we’ll be able to improve.” 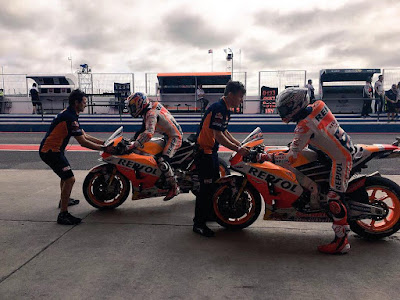