Testing Continues In Qatar For Marquez And Pedrosa

Marc Marquez and Dani Pedrosa both spent the second day of the Qatar pre-season test working on the general race setup of their RC213V.
Marc took to the track at 5:30 p.m. and managed to complete a five-lap run before a brief drizzle halted the action for nearly half an hour. Back on track, the Repsol Honda rider posted the sixth-fastest time of 1’55.196” on lap 10 of 50, improving on his personal best from yesterday by 0.703”. Dani headed out at 6:30 p.m. and finished in 16th place with his time of 1’55.875” (lap 23 of 48).
The test will conclude tomorrow, signalling the end of the 2017 pre-season.
Marc Marquez - 6th - 1‘55.196
“The impression is much better that yesterday. Today I’m quite happy, as we worked really well and made the correct steps. We were missing something during the day but in the last run we found something interesting for tomorrow. We’ll try to keep working in this way, which I believe is the right one. At the moment our rhythm isn’t bad, but we need to do better. This track isn’t one of the best for us, but we still have another day and we’ll try to make the best of it, working especially on the electronics side. The base isn’t bad; today we tried something that didn’t give the results we were hoping for, but we’ve planned something for tomorrow that we hope will allow us to improve.”
Dani Pedrosa - 16th - 1’55.875
“Today it was difficult to manage as the track was quite different from yesterday; it didn’t have much grip. That’s why we didn’t go for the fast time but instead worked to improve the feeling. Step by step, we improved a bit but not enough. We tried a long run as well, almost race distance, to understand the bike’s behaviour and in the end it wasn’t bad. We hope that tomorrow we can have a better feeling. We’re at a better point compared to last year at this stage of the season, but there are some areas that we need to understand more. We’re still trying to get as much information as we can before the first race.” 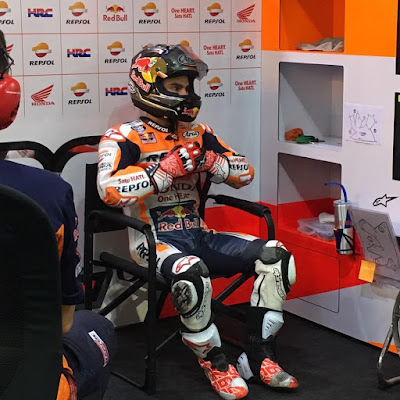