The fascinating circuit of Losail, with its floodlights and night race, will be the scene for the beginning of the 2017 MotoGP™ World Championship, which this year celebrates its 14th anniversary. This season is expected to be an exciting one for Team SUZUKI ECSTAR and the arrival of two new riders, Andrea Iannone and Alex Rins, has renewed the enthusiasm inside the garage, with new challenges ahead.
The development of the GSX-RR has seen Suzuki engineers putting-in a lot of effort during the winter time, with many cutting-edge advances introduced to the factory machines. Although nothing has been radically changed, many aspects of the bike have been improved, resulting in great feedback from the riders during the pre-season tests.
Iannone and Rins are eager to kick-off the season and they are looking forward to measuring themselves against their competitors in a real race. Iannone spent the winter testing to help the engineers improve the machine. While getting his racing-style adapted to the GSX-RR characteristics, he could also give important feedback for improvements. Rins will be a debutant in the Main Class and his priority will be to get a feel for the new category and get as much experience as possible.
The Losail International Circuit lies on the outskirts of Doha, the capital city of Qatar. The track itself is a flowing layout of 5.4 kilometres, surrounded by artificial grass designed to prevent sand from the neighbouring desert from blowing onto the circuit. The main straight is over a kilometre in length and there is a good mix of medium and high-speed corners, including a couple of quick left-handers, which has proved particularly popular with the riders.
In 2008, Qatar celebrated the first night time Grand Prix in MotoGP™ history, following the construction of permanent outdoor lighting. The switch to night time racing was a success and has continued to be so, with the Qatar event now established as one of the most spectacular on the MotoGP calendar.
Andrea Iannone :
“Here we are, at the beginning of a brand-new season. This year will be a pretty different one for me, as it will be my first time with another team and bike in MotoGP. This is a situation that both excites me and also pushes me forward. The winter tests were more or less positive. We had a good start, and then we struggled a little more. But, we worked hard and in the end, we were able to get some important direction for development. We were able to verify that our potential is still high. We have to work to close some gaps that we still have, and to take advantage of our potential to its fullest. I want to wish my best and say good luck to all of us, with the hope that everything will go as we hope. I also want to thank Suzuki and the team for what they’ve done and are doing for me, their efforts and the support. I hope to be able to give them what they expect from me, with great results.”
Alex Rins :
“I enjoyed the pre-season testing a lot. Riding my GSX-RR is super exciting and I really liked riding at every circuit. The mood inside my garage is amazing and all the guys in my crew made me feel at home from the very beginning. This is very important to me, because it gives me even more confidence. Finally, it’s time to start the races, and I can’t wait. The truth is that testing is ok, but I am a racer, and the race feels completely different, and that is what we are here for. The Qatar circuit is a track I like. We made clear improvements during the last test here, so I hope for a positive weekend. Then, racing in the night is very fascinating. I can’t wait for Sunday to come. I will try to enjoy as much as possible this first-time experience. My priority will be to learn as much as possible and to stay consistent during the weekend, hopefully making many improvements.” 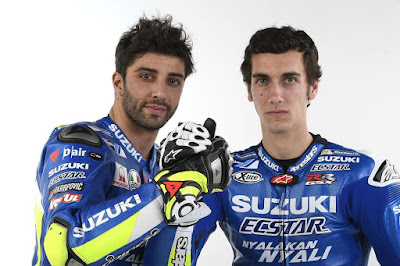