The testing season has come to an end in Qatar, where Team SUZUKI ECSTAR completed preparation for the 2017 MotoGP World Championship. Andrea Iannone and Alex Rins were able to end the intense three-day session with a positive feeling, as the difficulties they encountered in Losail have finally given the engineers a clear direction to work on to improve the GSX-RR performances.
The final combined classification sees Iannone in 13th place with a best lap of 1:55.284, which is less than a second slower off the fastest pace. This is a positive result after the struggles he encountered in the three days; and it came at the very end of the third day, after the engineers had finally found some new solutions that proved to be effective.
The debutant, Alex Rins, is now eager to get to his very first MotoGP race weekend, as he completed an intense work schedule and established more of his forward progression along the three days. His feel for the bike still leaves some room for improvement from the engineers, as does his lap-time, but his consistency was good and so was his pace. For him, a final 15th place in the combined classification saw him set a best-lap of 1:55.362.
Ken Kawauchi – Technical Manager :
“Every year the test in Qatar proves to be very difficult because the time to run is not very long and it is the very last chance we have before the season begins. So we always have many things to do. Finally, Alex made very good progress and he was able to complete the whole schedule of testing, trying many things and they went well. I look forward to the race for him. Honestly, Andrea struggled a lot in the first two days and also today he had some troubles in finding a good pace, but finally it looks like we found a way to go forward in the development. Unfortunately, there was no room to make a proper attack for time with this new setting, and this prevented him from improving on his best. But, the most important thing is to have found a direction to go towards. So, actually, I’m looking forward to the race with both of our riders.”
Davide Brivio – Team Manager :
“At the end we can say we finished this Qatar test with a smile, meaning that we worked very intensively in these three days trying to find a good set-up. Both Alex and Andrea, at the very end, finally got a good vibe. It looks like we could find some solution that allows Andrea to ride more relaxed and easy. Alex, as well, did a good job during the day; he improved more and more and he also made some good laps at a good pace. I’d say these have been three tough days, but it seems we found our way. Of course, it will need to be verified at the racing weekend, but at the moment I think we may have normalised the situation. Let’s see, now we will try to better-understand the information we got in the winter season and then we go for the Championship. For now, it´s enough with the testing. It’s time to get in the game and get serious. We will be here again in 10 days and we will take advantage of the free practice sessions to check if the intuition we had today will be effective. And then, let the season begin so we can see the real status of the art compared to all other competitors.”
Andrea Iannone - P13 - 1:55.284 :
“Overall today it was a bit like the other two days - neither too happy, nor too sad. The most important thing is that after each day we learn a little more, we understand a little more. I have to say that today was the best day of all because we have been able to understand one important thing. At the end, in the last three laps we have improved a lot, riding at 1´55 and we have had a bolt of lightning that has helped us understand where we have to go. Having a pace of 1´55 is something we had not been able to achieve throughout the test so far, so at least I'm a little happier. We still have a bit of chattering, especially on Turn 6, where I can’t get in and slow down like I'd like, but we've improved and that's what's important. And above all, I have managed to find the confidence with the brake and I was able to brake better, something that could not do before.”
Alex Rins - P15 - 1:55.362 :
“The truth is that I am very happy about how the three days of testing in Qatar have gone. When we had problems, we knew how to manage them and pull forward. The first two days we tried to evolve the bike and try to improve with the race-pace. But, it was the third day that allowed us to take a step forward, not only for a lap, but the race-pace. We are quite satisfied with the performance. For the race, we have to work a little more but at least we already know which path we have to take. The pre-season in general has gone quite well despite the crash in Valencia. I was able to get the pace and adapt well to the bike. The truth is that the team also helped me a lot to adapt quickly. I would have liked to do the test that we missed in Jerez, but with more kilometres we will adapt even more to the bike.” 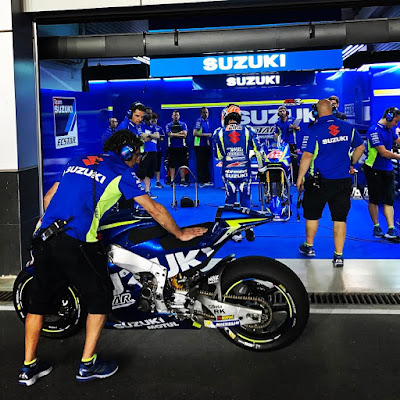