The 2017 MotoGP pre-season came to an end today with the third and final night of testing in Qatar. The timesheets saw Dani Pedrosa ending in third place (1’54.469” on lap 46 of 50), with teammate Marc Marquez 10th (1’54.990” on lap 12 of 47).
Both of the Repsol Honda men spent a productive night completing their testing plans, which included electronics, aerodynamics and refinement of general race setup, with the focus on keeping a good race pace. Dani continued until almost the end of the session, further improving his lap time at the end.
Marc fell once very early in the session and twice after 9 p.m. with no consequences, but he had to abort his race simulation on his sixth lap in the mid-1’55” range.
Action will resume at the same track on Thursday, 23 March, with FP1 for the Grand Prix of Qatar, the opening race of the 2017 MotoGP Championship.
Dani Pedrosa - 3rd - 1’54.469
“I think today was a positive day in general. We had a few things to sort out from yesterday, and step-by-step we improved our feeling, the lap times and our rhythm in general. The improvement was general and even if we still have work to do, we gained confidence and this was a positive end to the pre-season. This track is not one of my favourites, but the team did a great job and things kept improving. We’re in better shape than last year and we’ll try to add this confidence to the motivation for the GP and to do our best at the first race.”
Marc Marquez - 10th - 1’54.990
“I’m happy with the pace we were able to keep today but of course it hasn’t been the best test of the pre-season for us. I crashed three times, the first at the very beginning because the bike had a wobble at turn 4 and I braked late. Then later in the night I lost the front twice, and especially the last crash during my race simulation was my fault. But when you’re doing a long run you must try and push, otherwise you can’t understand where you really are. Anyway, better if this kind of thing happens now, during a test, and hopefully when we come here again for the race we’ll be able to manage things better. As I said, our rhythm is quite good; only Maverick [Viñales] is faster than everyone here, and if we were to race tomorrow I believe we should be able to fight for the podium.” 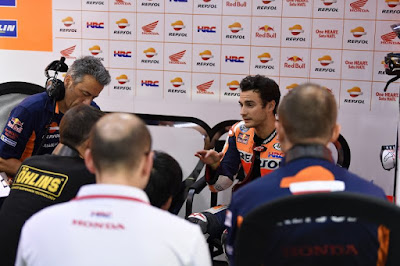